Robomongo has been acquired by 3T

As you may already have seen, we’ve today announced that Robomongo has been acquired by 3T Software Labs (press release). So we wanted to share with the community who have contributed so much to Robomongo’s success the reasons behind this step and why we believe it is good thing for anyone using MongoDB tools.

First off, we’d like to reassure everyone that this isn’t any sort of end for Robomongo or its users. 3T has committed to continue development of Robomongo in parallel with its own MongoDB IDE and will continue to support all existing Robomongo users. No-one will be forced to switch products.

Even better, Robomongo is now completely free as 3T is abolishing the subscription model, with everyone receiving upgrades at exactly the same time. Existing subscribers can choose to receive a free license for 3T’s Studio 3T Pro tool (previously known as MongoChef) – but it certainly isn’t compulsory.

Why have we done this? Three things really.

Firstly, we’re seeing astronomical growth in the MongoDB world, as more and more people adopt it for more and more projects, many at an enterprise level. It is an exciting time for the ecosystem and bringing together 3T’s Studio 3T tool, the leading commercial MongoDB environment, with Robomongo, the most used open source tool in the area, will help accelerate development for everyone. While they do similar things, the tools have completely different audiences – professionals using MongoDB in their enterprises in the case of Studio 3T and enthusiasts developing with Robomongo. We’ve seen a lot of people start on Robomongo and then evolve to Studio 3T when their needs change.

Secondly, it requires significant resources to keep up Robomongo’s development. At Paralect we’ve had lots of help from the community, which we’re really grateful for, but we needed a partner that could invest for the long-term and 3T fits the bill precisely.

Thirdly, and probably most importantly we know and trust each other. We get on well and are all committed to MongoDB and its success. Both tools were launched at the same time, in 2013, and we’ve grown up together, and admire each other’s success. From the Robomongo point of view, we see 3T as having the perfect combination of skills and resources to take the tool forward. At 3T we’re excited to be working more closely with the community and learning from them.

What does it mean to you as a Robomongo user? You’ll not see any real change and the existing Paralect team (including Dmitry) will work together with 3T’s experienced developers for the next six months to ensure a smooth handover for Robomongo. As we said development will continue as normal, so watch this space for the next version of Robomongo.

Please check our FAQ and if you have any more questions then don’t hesitate to add them to the comments section below, and we’ll answer as soon as we can.

Thanks for your support, now and in the future. 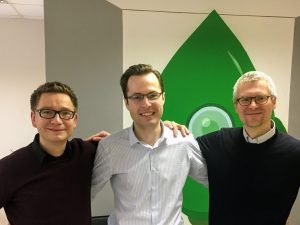 A quick visual of how 3T MongoChef has evolved in 2016