When dealing with performance issues in any type of database, it usually pays to take a simple approach and deal with the queries that are causing the most problems first.

MongoDB has some excellent features that can make this easy to do, which we’ll cover in this article. The most important feature is the profiler, but the explain method of a cursor is an indispensable tool as well, because it completes the picture.

Queries and commands can be exasperating to improve unless you have some clues. By the end of this article, you’ll learn precisely:

You might think that you’ve told the database what to do, but any query language actually only specifies the result you want and the set-based operation you require.

The database system decides how to do it and what physical operations to perform.

MongoDB comes with a built-in profiler that gives query-level insight as to why the database chose these operations.

The MongoDB profiler allows you to see what queries are being run, either by collecting all of them or sampling time-slices of them.

Generally, you’ll leave the profiler switched off unless you are collecting information or monitoring the usage of the database, because it has to store the information it collects.

When it collects queries, it does so from the entire instance, which means all your databases and connections on that instance. It can be turned on or off from applications or from the shell.

The profiler stores the queries in db.system.profile. This can be queried just like any other database, so you can find a lot of information quickly.

As well as the source of the query or command, there is a summary of the execution stats that tell you, amongst other information:

This will take you a long way down the route of diagnosing performance problems.

You can check your current profiling status using the command:

We can then change the status of the profiler according to what we want it to do.

We’ll start by setting it to Level 2.

Using the mongo shell or a GUI-integrated shell like Studio 3T‘s IntelliShell, run the following command:

which, in my case, returns:

This tells me that it was successful and the level was 0 (off). It also tells me that I’ve set the threshold for level 1 use at 30 Ms so that only those queries that take longer than that are recorded if I switch to level 1.

We can then confirm that it is now at level 2 by executing the db.getProfilingStatus() method:

Don’t have Studio 3T on your machine? Download the latest version here.

Let’s start by collecting all our queries, formatting them nicely.

Sort queries by when they were recorded, showing just commands

I’ve added the ‘pretty()’ method so as to make it easier to see the code of the command. Normally, you’d want to specify the namespace (“ns”) in the query. I’ve called it “MyDb.MyCollection” but you’ll need to change it, obviously. I’ll leave this out in the subsequent examples because you wouldn’t be able to cut and paste with a hard-coded literal in there. 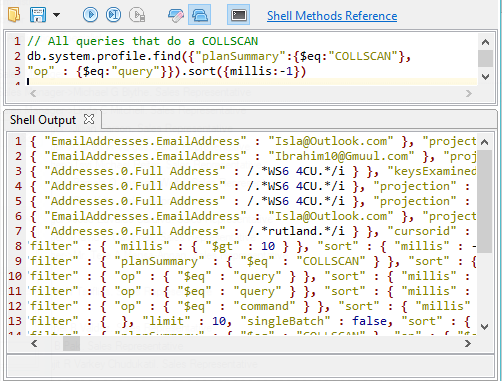 Find any query or command doing range or full scans

Find the source of the top ten slowest queries 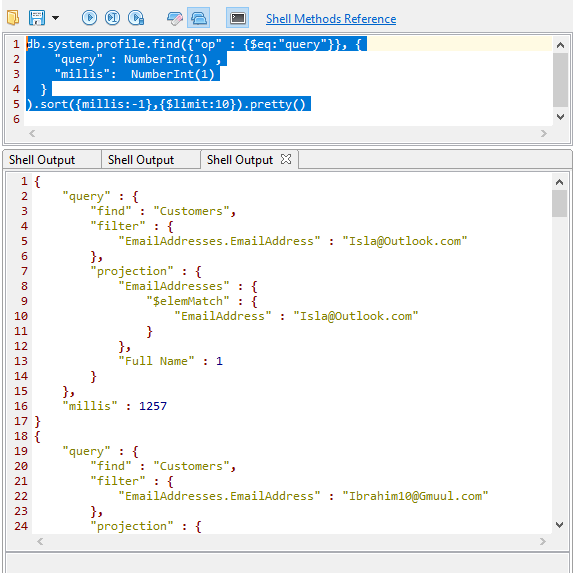 Find the source of the top ten slowest aggregations

Find all queries that take more than ten milliseconds, in descending order, displaying both queries and aggregations

For initial development work this sort of query is very useful, particularly because each document stores performance information along with queries.

Probably easier for finding your long-running queries and aggregations is: 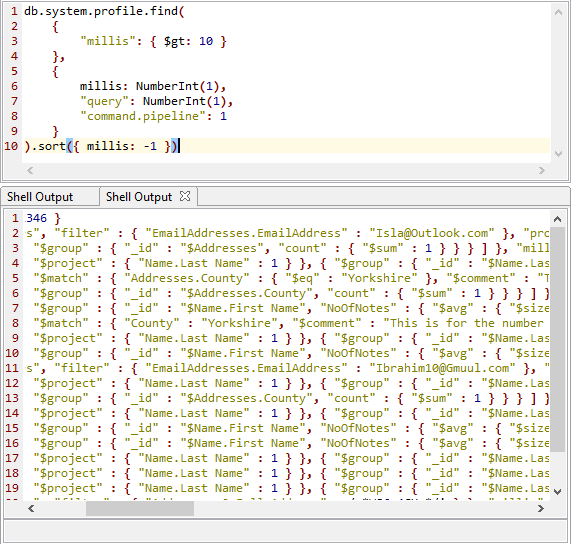 At some point, you’ll discover that it is a great advantage to comment your queries so you can select the one you want by searching for the comment, and you’ll be able to immediately be able to work out what the long-running query is from the comment.

And then you can find all queries with a particular comment or all the commented queries: 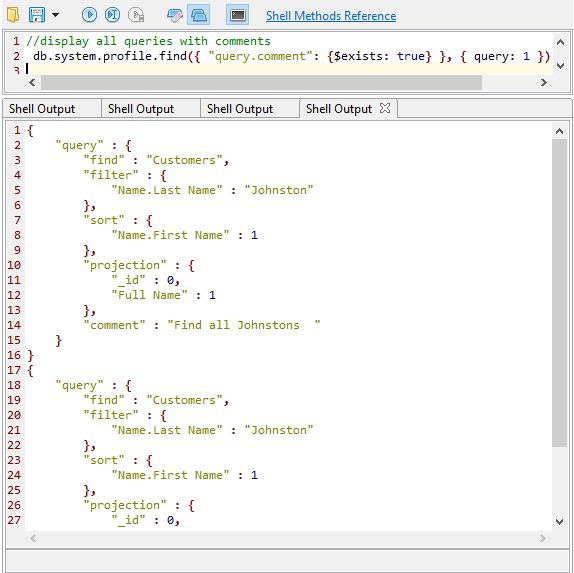 It is also possible to put a comment in the $match stage of an aggregation expression:

Because we just need to know what the slow queries are, we need to specify what we consider to be slow: meaning the criterion in milliseconds. You can, of course, store all queries and aggregations, and just select the queries that meet your criteria.

You are likely to find, in a system that is under load, that there is much too much ‘noise’:very rapid queries doing minor housekeeping tasks such as logging usage. In this case, it is much better to use profiling level 1, which stores only the slow queries. You may be investigating locking rather than pure performance, or you may be checking for range or full scans.

Sometimes you will have a query that is run very frequently, such as an authentication routine for a web page. It will take a moderate amount of time, but is inefficient. Here you will want the criterion of a cumulative time over a time period, so you’d need full profiling at level 2. It is, however, often useful to have the option of storing only slow queries.

Here we choose to collect just the data for operations that take longer than the criterion value of slowms. At the same time, we set slowms to 30 ms.

There are several resources on the internet that have examples of MongoDB profiler queries:

Once you have identified the query that will make the most overall difference once its performance is improved, you need to work out how the query is being executed.

Each database system has a different way of telling you the strategy it is using for a query and how well it has performed. It is usually called ‘Explain’. In any database system, this strategy is a set of operations that the execution engine needs to perform to return the data required by a query.

The database chooses the winning strategy by judging the relative merit of the alternative strategies. If you haven’t provided the means to enable the query to run quickly with an effective indexing strategy, such as by providing a usable index, it is up to you.

MongoDB provides an ‘explain’ facility that gives you a tool for troubleshooting queries, which comes in three flavors:

All three can be used to return information on query plans and the execution statistics of those query plans. To find out the strategy a query uses, the cursor that you use for queries – usually created in the db.collection.find() method – has an explain method that will tell you about the query plan.

You can specify the amount and type of the information you get in the explain output by using the verbose parameters “queryPlanner“, “executionStats“, and “allPlansExecution“.

If you don’t specify anything, the method uses “queryPlanner” verbosity which returns the queryPlanner information for the evaluated method.

There is another way of using explain(), which is to call the method on the collection:

By doing this, you can get an explanation of the query plan of aggregations, or in any other circumstances where you are chaining query modifiers.

Here, I’m using the alternative syntax to check the query plan of an aggregation query on our sample Customer database. I’ve added a simple way of giving an end-to-end timing. This can be:

The first sight of the query plan and the execution stats can cause some initial twinges of alarm, but are fairly easy to read with a brief explanation. I will need to be slightly more verbose, because without some up-front explanation it will remain slightly baffling.

MongoDB, when faced with a query, needs to determine a reasonable strategy for executing the query. This is a black art in any good database system, since an execution plan that works well in one context may be grindingly slow in a different context. MongoDB has a query planner that selects an existing cached plan or creates one for the query.

To process a query, the query planner searches the query plan cache to see whether a suitable query plan exists in cache that can be reused. If there isn’t, then it generates as many alternative plans as it can, based on the nature of the query, the available indexes, and the data distribution. If there is more than one, it tries each in turn. The winning plan is compiled and placed in cache, so it can be reused. If a suitable plan already exists, the query planner evaluates it via a ‘replanning’ mechanism. Based on how well it does, the Planner either keeps or evicts the cache entry, and replaces it with a new plan. The query planner executes the plan and returns the results.

The query plans are represented as a tree of stages, in which each stage passes its results to its parent node. The leaf nodes create documents by accessing the data within either the collection or the queries’ chosen index. They pass this document data to their parent nodes which then manipulate them. The root node derives the result set from its child stages and assembles the returned result.

Each stage has a name. The name describes the operation. The most important names are:

There are other undocumented names for stages, such as: ‘KEEP_MUTATIONS‘ – where possible, merge results that are invalidated mid-query back into the query results; ‘LIMIT, AND_SORTED‘ or ‘AND_HASH‘ – part of an intersection plan; ‘EOF‘ – end of file; and ‘SORT_KEY_GENERATOR’ – extracts a field(s) from a database to be sorted later.

A record of all this activity is within the explanation.

explain.queryPlanner.namespace holds the value of the namespace against which the query is run.

When an execution plan is executed, each stage of the plan is done so in small “work units” which might involve examining a single index key, fetching a single document from the collection, applying a projection to a single document, or doing a piece of internal bookkeeping. It is a useful indication of the effort that the stage took. Each stage ends up with intermediate results that are returned to its parent stage.

One of the most useful nuggets of information is whether the index used was a covering one. If it has, then the explain result has an IXSCAN stage that hasn’t a got a FETCH branch, and the explain.executionStats.totalDocsExamined is 0.

Here’s some other useful information you can find out from the execution stats:

MongoDB has a very sensible range of information that is available for tuning the performance of queries and aggregations.

When tuning queries, it generally pays to pick off the worst-offending ones first and to tackle the most obvious problems first. There is a lot of information available on query execution, but whilst it is interesting, most of it is only important once you have tried and failed with the obvious remedies. Only then is it necessary to wade into the more esoteric information such as locking, selectivity or data distribution.

The profiler and the explain methods will take you a long way. After all, many problems become pretty obvious just by staring at the source of the query.

Complement this tutorial with another on how to develop an effective MongoDB indexing strategy.

Was this article helpful?